Roy , a little kook in nature , would often dream of a house in a semi dense jungle . It would be placed on a big giant wheel. Roy in his dream would go near the wheel and out of curiosity would turn it little and the door of the house would creak open. He would enter the house , dark as hell and the door would get shut. He would wake up in a maniacal way gasping for breath. 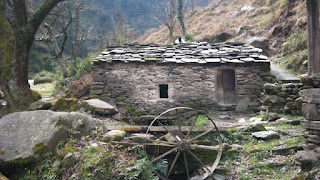 Finally one day he recalled that long ago once he had locked up his classmate in the chemistry laboratory by turning the door knob and then with a key. He did that because he envied his classmate for excelling in chemistry.
The attempt was not lethal but certainly Roy had killed his confidence.

This post is linked to Friday Fictioneers and Three Word Wednesday