From the morning it had been raining a lot but it stopped after 4pm in the evening. Its good that it stopped as I had planned to go out for some shopping. There was something I was trying to recall but was unable to. Something I knew I was forgetting , something about the date . 28th Aug... I don't know what happened on that date but something is there about this date that kept me thinking over and over. Its a great pain , believe me when you try to recall something and your brain
falls short of the configuration to remember it. In the eve , my wife handed me the list of things that we were supposed to buy from the market.
Before getting ready I took the mobile and clicked the facebook icon. Since morning I had been busy with the computer games and was unable to open facebook and check the updates. Its good to know what your friends and some strangers are upto. But as soon I opened facebook I realised what I have been missing since morning. It was Nandu sir's birthday. That's what was pinching me since morning. 28th Aug was his birthday... thanks to facebook birthday notifications. I am actually good in remembering dates but I don't know how I forgot this one. Nandu sir lives with his mother in the same apartment I live. He stays in the 4th floor flat. Mine is 3rd floor. I know him as his mother was my school teacher.

I told my wife about it . We planned to buy him a gift and celebrate his birthday in a special surprise mode. His health has not been that good lately. In spite of his illness he tries to be happy and warmly welcomes us when ever we meet him. He has a gem of a heart. So we went to the market to look for something that would create a broad sweet smile in his face. I could still not believe that I had forgot something so important and that also a date , a number .

We had bought a pen stand for him . It was lovely made of glass and round in shape. It had two layers of glass actually with fluid in between and a scenery encrypted. The fluid also had some decorative colourful dust . Personally we had liked it a lot. After returning home we had prepared a plate with some hand made cake pieces and coloured candles. We called up Nandu Sir if he was free. It was 7.30pm already and he often has his early dinner by that time.

We went upstairs with the cake and the gift and rang the door bell. He opened the door for us and was a little surprised seeing all that arrangement. We wished him loudly but he was still a little confused about the whole thing. 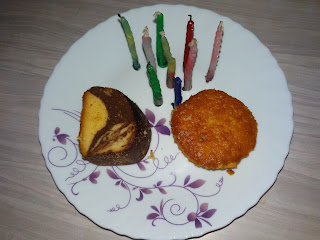 "But its not my birthday today ... Who told you that today is my birthday ?.." he said in astonishment.
"Facebook" .. was my prompt reply. ( I know it was little silly but had no choice ).
He smiled and gave that same broad smile , " Yeah that's a false arbitrary date I had put in facebook. Actually its my star birthday."
" Now what is a star birthday ?  "I enquired .
He offered us a seat and told to relax. He was smiling and was very happy to see the arrangements we had done for him. He said , " Star birthday is related with Nakshatras and its something related to the Tamil calendar. According to English calendar my birthday is on 14th September.

"Whatever it is sir , if you have given it on facebook we will celebrate it today itself.", my wife said.

He smiled and agreed. Maam was also very happy to see his son so happy. He blew off the candles cut the small pieces of cakes in little more smaller pieces and we sang the birthday song and above all they liked our gift a lot. We shared the cakes and all of us enjoyed very much.

Sometimes celebrations without even a reason can boost our moods. The only thing that troubled me that night, that what was the significance of Aug 28th if it was not Sir's birthday...